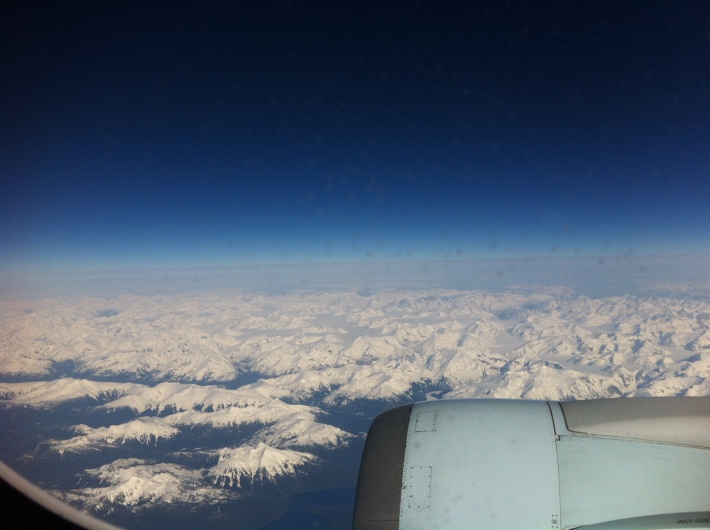 For those of you not on Facebook, sorry for keeping you in the dark and I hope I didn’t have you worried, but as the title indicates, I made it safely to Osaka, Japan!

My excitement — and my experiment to combat jet lag — meant that I stayed awake the entire 12-hour flight to Seoul, watching 3.5 movies, 8 tv shows, enjoying 2 meals and one complimentary mini-bottle of red wine. The stop-over in Seoul was pretty routine, but it did serve its purpose in reminding me that I am now the visible minority again. Luckily, with two years experience of feeling that way, it didn’t take very long for me to not really notice. Especially when I got to the waiting area for my flight to Japan and the foreign, yet familiar Japanese language (ie, more familiar than Korean) surrounded me.

As soon as I touched down, I had my first chance at Immigration & Customs to see how rusty my own Japanese had truly become. At Immigration, I understood all of his questions, but bumbled a bit with my replies. By customs, however, I had a full conversation with the officer! Very basic stuff, but still, I was pumped! Even more exciting was that I was able to make it to my friend’s apartment without using my iPhone! This may sound ridiculous to some, but for those of you like me, who have lived in a foreign country with an iPhone, sometimes you fear the thought of how you would do anything in that country without it! After taking the bus, train and short walk to get to my friend’s place, all without the power of 3G, I am no longer afraid (and you shouldn’t be either)!

As for the actual weekend I have spent in Osaka… it was incredible.

For such a short time, I was so happy to have fit in as much as I did. These awesome Osaka highlights included:

And then today I was able to repack all of my stuff, enjoy a bit of the sunshine and am about to go out for one final meal in Osaka before catching an overnight bus to Kanto!

Thanks for an awesome time, Osaka. And see you tomorrow, Gunma!!

3 thoughts on “The Long Flight and my Weekend in Osaka”